The Parisian Life of Vee Speers

Amidts the high energy buzz of art vending and champagne sipping that was Show Off 2009, one photo series set itself apart from the rest: The Birthday Party.

A native Australian, but long time Parisian resident, Vee Speer's most recent series is a provacatively elegant look at childhood. In the following interview, Vee discusses her main photo projects to date, her experiences being a female photographer and her upcoming series "Immortal." 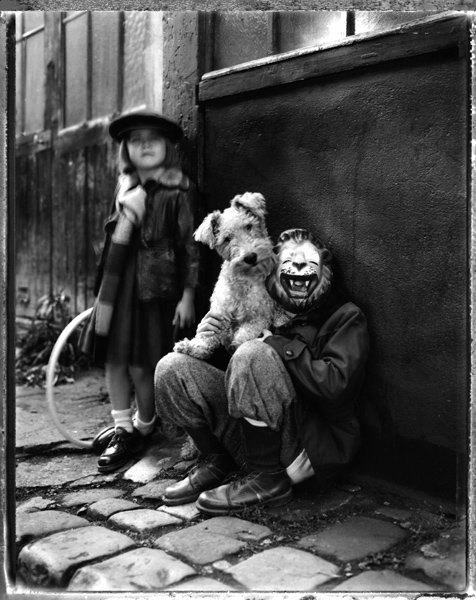 As a native Australian, what drew you to live and work in Paris?

When you’re an Australian, you’re a long ways from the rest of the world, it’s kind of isolated. It’s gorgeous, perhaps too comfortable. Somehow, I just needed different stimulation – from the old world as well as a different culture. The European culture drew me in. Also, my family roots are from England and a little bit from France. I guess it’s kind of coming home in some ways. When I got here I was like “Yeah, this is it!”

Would you say that your work has a lot of European influences?

Yeah, I think it does because if I had taken those photos in Australia, the idea wouldn’t have been the same. The esthetics would have been different, with different kinds of faces. When you live overseas, you melt into another way of thinking. You adapt and change.

For one of your series, “Bordello,” what ideas or feelings did you hope to evoke while photographing other members of your sex?

First of all, respect was a big thing: beautiful, respectful, sensual. I think the feminine regard on another woman is quite different to the male regard, which maybe has more sexual tension because it’s a natural thing, isn’t it, male and female, whereas between women there is a lot of trust and relaxation. There’s not this need to pose or to please. This isn’t a criticism, but in men’s nude photographs of women there is this sexual regard that can be more straight forward, or more explicit. Rather than focusing on it being a nude, I looked at the poetry and nostalgia of it. I wanted to tell a story: I live in the Red Light district; I see prostitutes on the street every day.

I tracked down some of the real bordellos. I found some amazing places. For an Australian to come here and find gorgeous old buildings, great architecture that we don’t have at home, but also find these ex-maisons closes, it was just incredible. There aren’t that many left. Some are just the foyers; some just are fresques in an apartment. I found one entire house in Pigalle that is now an antiques place, because it’s preserved as a heritage building. It was called the Shanghai, so it was an oriental themed Bordello. How amazing to have that décor!! 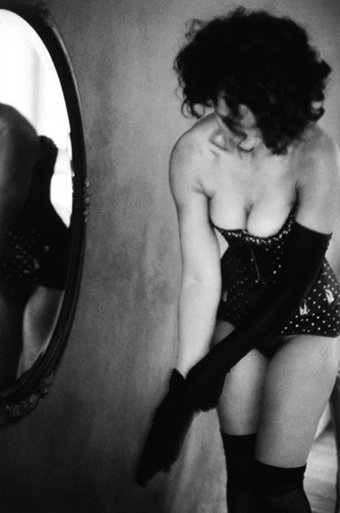 How did you research these places?

It was really weird. Like everything here, you just ask a few people. What I find incredible is that the chances of asking the right person must be slim and yet it didn’t take much and it never does. Maybe because the circle of friends I mix in is artistic or musical. Those kinds of people just know.

I also read a book by Laure Adler “La Vie quotidien dans les maisons closes: 1830-1930.” I went to the Marie and asked questions. In dinner parties, I would ask “I’m doing a project, does anyone know where I might find old Bordellos…?” Then someone would say, “Oh yeah, 212 rue de…” It was that easy. That’s Paris I think. 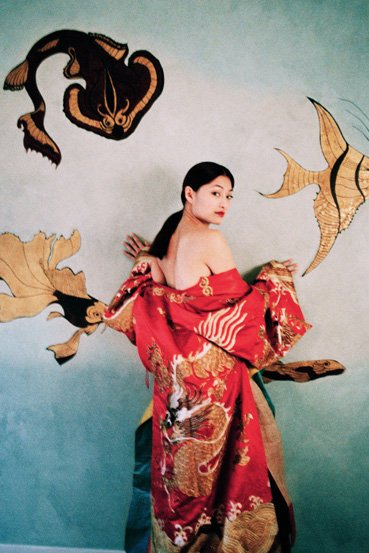 In this same project, you mention the importance of seduction for a female. Can you elaborate?

It wasn’t the ‘importance of seduction’ but more about the masks we wear and what we hide and show. I’ve become more interested in what you see and what you don’t see-the play between interiors and exteriors. Seduction is a bit of a game – masks and mystery. It is a game, but it is life as well. We’re not just machines walking around.

Have you encountered any discrimination as a female photographer?

When I was starting out, in Australia, there were very few female photographers. When I came to Paris, actually, I noticed it even more. I was an assistant in fashion for a while and it was mostly male photographers again. You could see that it was working for them. It was a lot more difficult for women, which is why there weren’t many women working in fashion. Isn’t it a male dominated world in most things anyways? But in photography, I think it still is today… 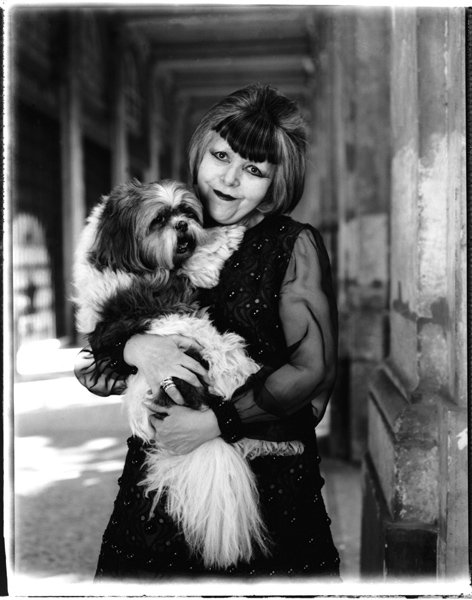 It’s just motivation to do better I think – motivation to stand out more. I think you have to be twice as tough, or twice as focused, or twice as good. I know that that is the case, but I never thought of that as a block for my work. Because I come from an all-girl family, there was never a job for the boys or the girls; it was just that the girls did it all. My mom did heaps and she worked really hard. 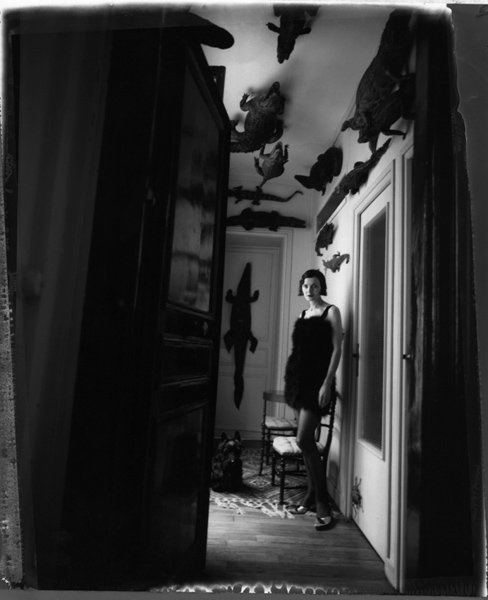 What is the premise of your recent project “The Birthday Party”?

Capturing the last days of childhood and seeing that slipping away with my own daughter; realizing that once you’re a teenager you’re not innocent anymore and that’s the way life is. I really wanted to package up that little world. That was my initial motivation. After that, I wanted to get in there and really explore that childhood through a child’s eyes. I shot them low down so they were dominating. We always look down on a child, they are small, but in the photos are taken at the child’s eye-level, so the children dominate. They’re not smiling but they are in control. They’re not unhappy. They are in their own world.

There are also undercurrents of violence, darkness and war. What ideas were you trying to explore?

Initially, I thought, on an obvious level, boys play with guns, even if we tell them not to. Take the gun away and they’ll get a stick. They just do that – they are impulsive. Then I started thinking about the way they might protect themselves and dress up. They fight and they play war games: Cowboys and Indians. It’s all about that kind of human nature, what we are really like and what we learn to control and kind of put away. Not violent, but I guess anarchy in some ways – individual expression, anarchy and spontaneity. I started by wanting to do the cliché: the boy with the guns, the girl with the dolls, but exaggerated. So the boy had a really big gun and the girl was covered in dolls. I did a few of those. The war symbols began with the gas mask. It is a really dark side of it, but kids will try all sorts of combative stuff, or what we would think of as strange. 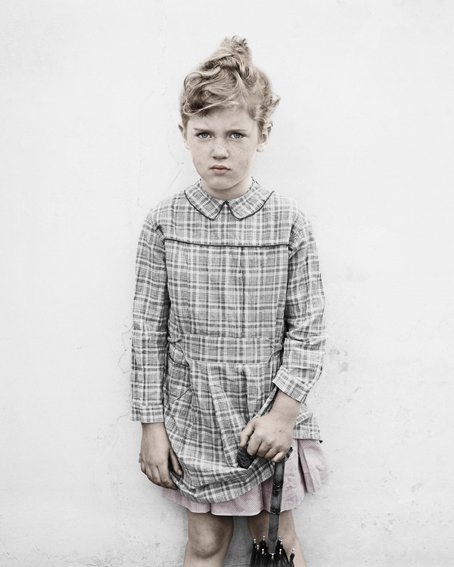 But then, I realized that it was my reflection on the world that we were living in and what the children were exposed to. In the real world, children are in war; children sometimes have guns. I was punctuating the whole story with that. It just came about of its own accord. I guess I was not going to compromise the story to make it nice. Childhood is not all sweet and nice – it’s good and bad, imaginary and sweet, dangerous and scary. I was trying to get into all those slices of life, the layers. 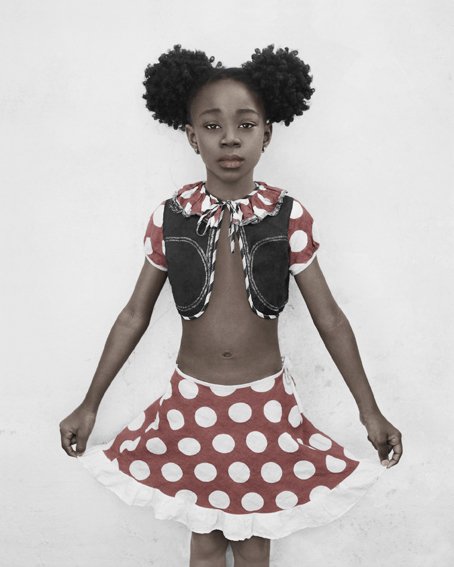 And the exchanging of sex roles…?

Right, well what little boy hasn’t put on his mother’s shoes? I know boys that would cross dress without even thinking about it. I remember when I was a kid, I was Robin Hood. I had a bow and arrow that I made myself and I was running around my huge garden in Australia chasing my sister and flinging arrows at her. I didn’t know girls weren’t supposed to do that. 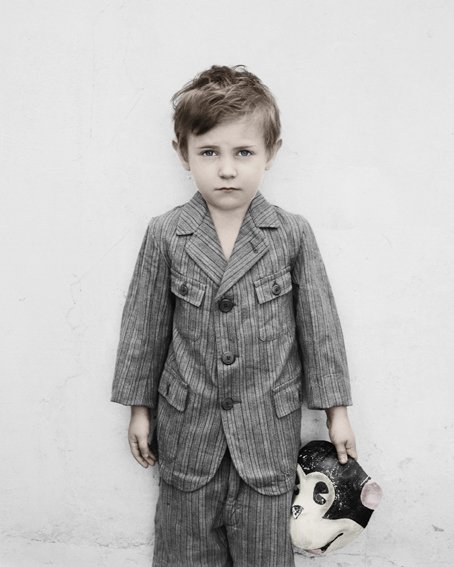 In what ways do these photos express elements of a self portrait?

Susan Bright, who wrote the introduction to my book, pointed out that it might be self portrait. As a child, sometimes I felt like singing and performing, other times I was shy. It was all about my emotions and I suppose my experiences were similar to other kids. Sometimes you feel insecure and alone, while other times you feel like the most popular kid in school. School can be tough, like growing up in a big family can be tough. You’ve got to be on your guard. I think The Birthday Party was about me and then my own kids, and then people in general. 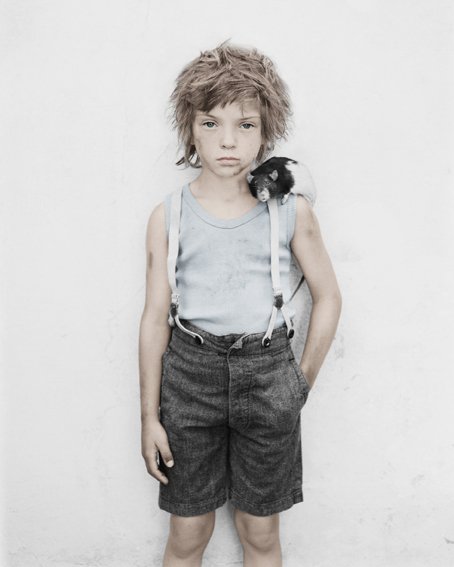 Bloggers seem to adore this body of work and post many of your images on their sites. How do you feel about this…?

I’m flattered and so grateful. I love to communicate in that way, more than verbally. I’m totally flattered that I can reach out and so many people can respond to my images. Some people go a bit crazy. They really love the work. I’ve been overwhelmed by the response with this series. I don’t know why, but I guess there is something of everyone in there. Everyone can relate or connect to a lost childhood. In some ways, hopefully it’s a good memory. 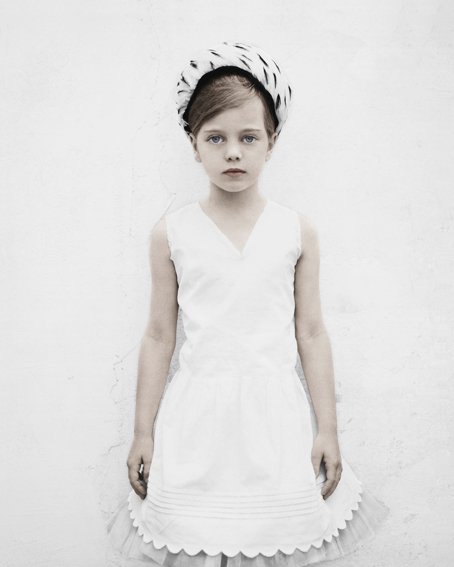 What kind of connection exists between these three projects: Parisians, Bordellos and The Birthday Party?

Basically, for “Parisians,” they are eccentric Parisians that I came across. I’m a portrait photographer obviously and I’m really attracted by unusual faces. I like beauty but it doesn’t have to be the classic beauty. So, the Parisians were mostly strange, unusual, or different. I put them into a theatrical setup. I did maybe 15 images and then the Birthday Party came along. It took over everything, so I didn’t have time for anything else. People do ask me about the Parisians. You get to a point in your career where people want to see the older work and you’re forced to bring it all out. So, it will have its time.

As far as a connection goes, maybe it’s the internal and external and the aspect of play and dressing up. The project “Parisians” is all about showing the exterior, but not revealing too much. 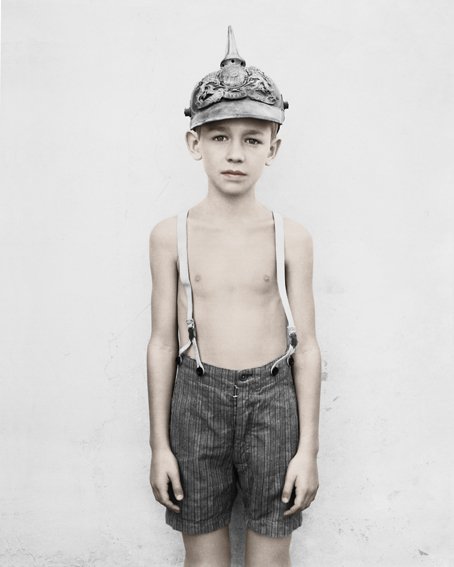 What are you currently working on?

It’s a new series called “Immortal.” It’s about my reflection on society’s obsession with youth and beauty and our fear of death. I was partly inspired by a portrait of Dorian Gray, by Oscar Wilde. It’s about a man who sells his soul to the devil for eternal beauty. He has a painting done of himself as a young man and it’s put in the attic. The painting ages over 200 years and he doesn’t. He becomes decadent, extravagant and evil. The pact with the devil is such that he stays physically young and beautiful, but in fact he goes crazy. In the end, he runs up to the attic and rips the curtain off the painting. He sees himself as this old, decrepit, ancient man and he dies. Then the painting goes back to the youthful painting that it was.

So, the work has a bit of an esthetic of what I imagine the painting to look like, even though I’ve never seen the portrait of Dorian. The portraits have an Italian Renaissance feel about them. The women that I’m photographing are all pretty young – between 18-25, in the peak of their youth and beauty. Then, I’ve put the portraits against Australian landscapes. They are very other-worldly looking and strange, which I really love.